Darjeeling is a town in India’s West Bengal state in the Himalayan foothills at an altitude of 6,700 ft. It was once the summer resort for the British Raj elite, it remains the terminus of the narrow-gauge Darjeeling Himalayan Railway or “Toy Train”. Famous for its black tea grown around its slopes. Its backdrop is Mt.Kanchenjunga the world’s 2nd highest peak. Dense evergreen forest of Sal & Oak lies around the town, where a wide variety of orchids are found.
Darjeeling is considered as a center of music, place of musicians & music admirers. Singing & playing music are common pastimes among local residents.

Tiger Hill:It’s a Sunrise point where the first rays of sun hit the peaks of Mt. Kanchenjunga making it an experience for a lifetime.

Japanese Peace Pagoda:It’s one of the 70 odd structures built under the guidance of Japanese monk Nichidatsu Fujii. If you walk up from Clubside along Gandhi & AJC Bose Road, you see the white structure standing out the “Peace Pagoda”.

Batasia Loop:Located at a distance of 5km from Darjeeling. Having a spiral railway track where the toy train takes a complete 360-degree turn, completing a loop through a circular area.

Monasteries:Surrounded by lots of monasteries each one unique in its own way. A visit is must to know the local culture.

Mirik is a tourist spot located in the hills of Darjeeling district in West Bengal, India. The name Mirik comes from the Lepcha word Mir-Yok meaning “Place burnt by fire”. It has become a popular tourist destination for its climate, natural environment & easy accessibility. The center of attraction is the Sumendu Lake, surrounded by a garden named “Savitri” Pushpoudyan(after Savitri Thapa – a martyred soldier of INA) on one side & other side pine trees linked together by arching footbridge called Indrani Pool(named after a martyred soldier of INA). A 3.5 km road encircles the lake & is used for walks with the view of Mt. Kanchenjunga on the far horizon. Boating on the Shikaras & horse riding is available.
The highest point Boker Monastery at about 1768m(5801 ft).

Sumendu Lake : Heart of Mirik.Have 80 ft long footbridge over the lake. Boating on the lake & horse ride around the lake available.

Rameetay Dara : A viewpoint near the town from where one can see the surrounding mountains & the vast plains below.

Bokar Monastery : Located on way to Rameety Dara – is a Buddhist meditation center.

Debi Sthan : A temple of Hindu Goddess located on a hillock near Sumendu Lake.

Tingling View Point : A panoramic view of tea gardens can be seen from here.

Sunrise Point : Sun rising in the east & it’s the reflection on Mt. Kanchenjunga in the north can be seen. Plains of North Bengal also can be seen from here. 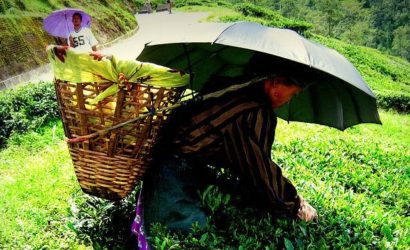