Gorubathan is a small town in the Kalimpong District of West Bengal. The nearest railway station is New Mal. The drive from Damdim to Gorubathan traverses through beautiful tea gardens of Dooars including Ranichera, Rangamati, and Sylee.

Gorubthan is known amongst the locals as “Sombare”. The name has its link to the local haat(mobile market) organized on every Monday. The town is located to the east of Chel River.

Just a kilometer uphill from the main market is Gorubthan Tar – A flat land from where you can have an excellent view of the mountains on the backdrop and the Gorubthan Bazar.

You can go for a village walk. There is a 200-year-old stupa in the middle of the village.

Hiking to Dalim Fort(Where Lepcha king Gaeboo Achyok was assassinated by Bhutanese Authority) is a lifetime experience. The fort was built by Bhutanese king. Ruins of the fort are still there. On the way Dalim fort there are few waterfalls. From the top of the Dalim Fort, you can have a bird’s -eye view of the entire surroundings. Continuing to hike you will reach Panch Pokri(Five ponds) via Dalim Kup, Dalim River, and Dalim Forest. The entire trek is for a day.

Sakham Forest: On the way to Sakham Forest you will come across lush green Mission Hill Tea Garden. There are two mountain rivers at Sakham – Neora Nody and Mal Nody. A forest considered ethically important by the locals. On the way, you will come across inscribed rocks, Orange plantations (in winters) and broom plantations. Not get surprised if you get a glimpse of wildlife. You can spend some time at Neora Hydel Project located on river Neora.

The place has come into prominence recently. Few home-stays has come up which cater to the needs of the tourist.

Lava and Loleygaon are two quaint mountain villages in the district of Kalimpong West Bengal.

Lolegaon: Lolegaon is basically a Lepcha village. From Lolegaon on a clear day entire range of Mt. Kanchenjunga is visible.

At the middle of the village, there is a flat tableland opposite to the Eco-Park, in the vicinity of which are few small tea stalls and shops. This is the only place in Lolegaon where you can buy small stuff or eat.

At a walking distance from here is the most popular attraction – The Canopy Walk. It’s a 180-meters long hanging wooden tree-top bridge that goes through the dense jungle. The bridge slowly rises in height and you will find yourself walking through the treetops amidst dense forest.

The bridge swings at times and you may have to catch the ropes on both sides. Keep a watch on the forest and you may see many different kinds of Himalayan birds. It’s an amazing experience.

After Canopy walk, you may visit the Jhandi Dara Viewpoint. It’s a sunrise viewpoint.

Lava: Lava is the base and the gateway for the famous Neora Valley National Park and surrounded by dense forest of coniferous trees. You should stay overnight at Lava for a visit to the national park which is full of exotic flora and fauna. Permit to visit Neora Valley National Park is issued from Lava.
Lava also attracts many trekkers. Trekking to Samthar Plateau starts from a place called Gompa Dara which is located close to Lava. The forested area around Lava is paradise for bird watchers. You may see many different kinds of birds like Blue Robins, Fulvetta, Finch, Wren Babblers and many more.

Close to the local market (bazaar) is Lava Monastery, also known as Ratnarishi Bihar Buddhist Gumpa. This monastery was established by Karma Lodro Chokyi Senge, the third Kongtrul Rimpoche. Situated beside the large Neora Reservoir Lake, this religious residence is erected using brick and concrete. Due to the increase in the number of devotees and monks over the years, the facilities in Lava monastery were expanded. Today, the Fourth Jamgon Kongtrul Rinpoche studies and trains here.

Rachela Pass is virtually considered as a junction between Sikkim, Bhutan, and Bengal. Rachela Pass is the trade route between India (Sikkim) and Bhutan located at an elevation of 3152 meters. The pass is often visited by tourists and experiences footfall round the year.

One of the most significant trade routes in the history of India, one could witness mules carrying merchandise within countries. The tracks are still noticeable. You can also spot the 4 chief ridges dividing the valleys known as Neora, Rishi, Rangli, and Jaldhaka.

From Rachela Pass, other passes of Jelep La and Nathu La are visible. Also visible are the Singalila Range with its proud peak Kanchenjunga, worlds 3rd highest and also the entire Chola Range.

The place can be approached by a 4 km walk uphill from Lava through the deep silent forest of Pines, Rhododendrons, and Orchids. The enthralling views of the vast range of Kanchenjunga, the blue mountains of Sikkim, Nathu-La, and Jelap-La passes are an experience of a lifetime.

Rated as the best and ultimate site in the Kalimpong area, it is situated at a height of 8250 ft, about 10 km away from Lava and 28 km away from Kalimpong. Jeepable roads reach until the last four Km (Up Hill), however, electricity has not reached here yet giving it a medieval sort of charm.

A relatively new destination, this is the hill station just across the hill from Rishyap. The village is adjacent to Neora Valley National Park and the famous Changey falls extant from Kolakham.

From Kolakham the lush valley and the rolling hills stretch north as far as the eyes can see. In the west, they end at the foot of the Kanchenjunga. In clear weather, the snowy peaks of Kabru, Kabrudome, Kanchenjunga, and Pandim stand out against the stretched sky. Enthusiasts can go for a walk on the jungle trail. The chance of coming across wildlife is quite high here. A trek of 5 KM will take you to the beautiful Changey falls.

The best way to explore Kolakham is to go around the village walking, don’t forget to carry water. Orchids and chirping of birds will be your companion. 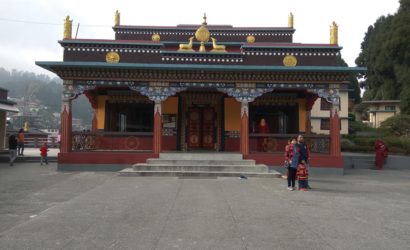 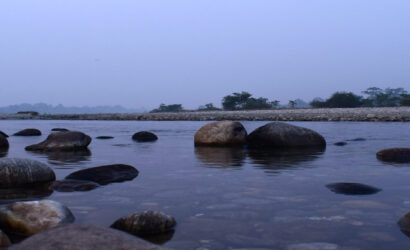